When crisis broke out in Syria in 2011, people began to flee their homes in search of safety for themselves and loved ones.

Now, four years on, millions of families have been uprooted in what is one of the world’s worst humanitarian disasters – one that shows no signs of abating. 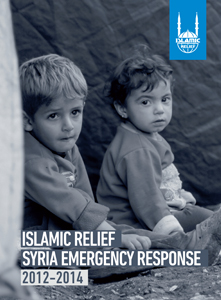 Islamic Relief’s latest publication Syria Emergency Response, 2012-2014, is an account of our work in responding to the crisis.

We began supporting those affected by the crisis in 2011, and the next year started operations within Syria, which continue to this day. We have so far reached more than seven million people, spending more than GBP £122 million on humanitarian programmes.

With funds from donors as varied as the Disasters Emergency Committee, World Food Programme, Spanish Development Agency, and the United Nations, Islamic Relief is helping by providing food items, education support, shelter assistance, psychosocial support, safe drinking water and medical assistance, aiming to protect the lives and dignity of people who have lost so much.

Abdulrahman and his family, who fled to Lebanon, are amongst those we have reached. One of their sons, Mustafa, became sick and has since died. They live in a tannery near a rubbish dump, and have been given food, medical help, baby supplies, and blankets to help keep them warm in the winter, and psychosocial support to help them through their ordeal.

Islamic Relief will continue to support refugees in neighbouring countries including Iraq, Lebanon, and Jordan, and internally-displaced persons in Syria.