Islamic Relief continues to work deep inside Syria to provide much-needed aid. In the last six months alone, our GBP £8.6 million programme has reached over 1.2 million people in the north of Syria. Our distributions included 6.3 million medical disposables, multivitamins, food parcels, hygiene kits and essential items such as clothing and blankets.

Um Ahmed, 60, was amongst those to benefit from our work in Hibat Allah camp, Idleb. She and her grandchildren received food packs, mattresses and blankets.

“May God bless you and reward you for your kind assistance and support.” Um Ahmed, Hibat Allah camp, Idleb.

We have provided UNRWA with funding in excess of GBP £447,000 to assist Palestinian refugees trapped inside Syria’s besieged Al Yarmouk camp.

The funding for the ongoing project ensures that over 41,000 people receive food parcels, whilst thousands of women, children and elderly people benefit from family hygiene kits. 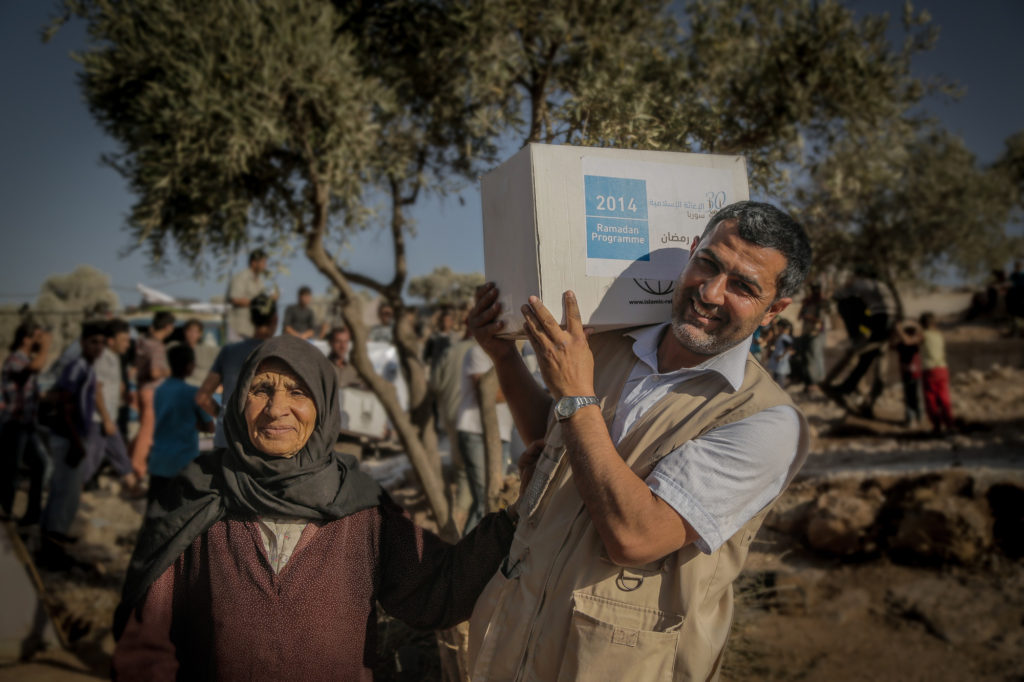 By the middle of 2014, the number of Syrian refugees living in Jordan exceeded 600,000. Many living in host communities face difficult living conditions, limited livelihood opportunities, rising rent and increasing costs for food, water and other essentials.

During the last six months, more than 208,000 Syrian refugees in Jordan benefitted from food vouchers and e-cards. We distributed over 15,000 clothing vouchers, with vulnerable families also receiving mattresses and blankets amongst a range of vital items.

We covered the cost of rented accommodation for 490 families, supported over 1,000 children to enrol in local schools, and made sure that more than 12,000 people received medical treatment.

Aid and psychosocial support in Lebanon

Um Mohamed with her grandchildren outside their tent.

In Lebanon, there are now over one million Syrian refugees. Islamic Relief provided support to more than 187,266 people in Bekaa, Beirut, Mount Lebanon and South Lebanon.

As well as providing essential items such as food parcels, milk for babies, kitchen sets and heaters, we also ensured that 158 vulnerable children receives psychosocial support designed to help them adjust to their experiences, and ensured over 2,200 people received medical treatment – and provided two ambulances.

Um Mohamed, 63, has been living with her seven orphaned grandchildren in a camp in Mount Lebanon since 2013. The family relies on the support provided by Islamic Relief, which includes sponsorship for one of the children as well as food and other items.

Around 225,000 Syrian refugees are seeking shelter in Iraq, mostly in the Kurdish-Iraqi region – which has also come under significant pressure as Iraqi people flee violence in the country’s Ninewa and Anbar governorates.

More than 73,000 people have benefitted from Islamic Relief Iraq food distributions in the last six months. We also provided shelter and reached 14,700 people with our health and hygiene messages.