Mohamed, his two daughters and their children have rarely been far from danger in northern Syria, which is now marking a decade of crisis and suffering.

Displaced multiple times, Mohamed currently lives in a camp in northern Syria with his five grandchildren, who lost their fathers during an airstrike.

“Our homes were completely destroyed and the bombs killed many women and children. We fled under a barrage of bombing, thankfully escaping with our lives,” Mohamed remembers.

“I find it very difficult to buy enough food because it is so expensive. The children often ask me for sweets and it makes me so sad to know that I cannot buy any for them.” He tells us that they have been eating two meals a day and going to bed hungry.

“Before the crisis, we ate three meals a day, as well as fruit, sweets, and snacks. Food is essential, and when we are able to get enough food, we will feel safe.” 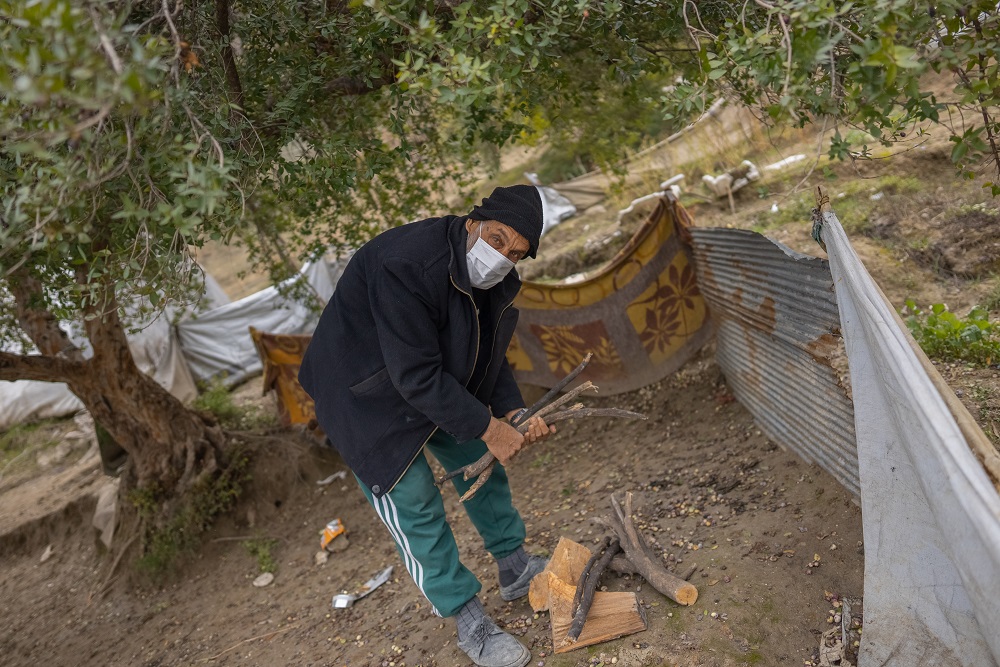 Harsh winter makes life even more difficult
The harsh Syrian winter has made life harder for Mohamed and his family. Their tent got torn and water seeps through. The family does what they can to stay warm, often walking long hours to the top of the mountains to collect firewood.

Mohamed suffers with stomach issues, for which he needs surgery. This is something that he simply cannot afford but that he longs for as the pain keeps him up at night and he worries who will take care of his family if he isn’t able to work. “I am so afraid that I will die and there will be nobody to take care of them and provide for them.”

He and his family also face the growing threat of coronavirus, which is now reaching the camps in northern Syria, leaving poverty-stricken families struggling to protect themselves against the deadly virus.

“We fear infection. We heard that the Coronavirus is spreading in the neighbouring camps. I worry about the children. I have bought protective masks for them to keep safe. I’m also scared because of the disease I’m suffering from. I am afraid of leaving the tent or going to the store or anywhere else.”

The virus has not yet reached Mohamed’s camp, but they are already taking precautions and his grandchildren have stopped attending school. “I advise them on how to take protective measures against infection and they now wash their hands regularly with soap.”

He has turned to using some of the money needed for food to buy masks for the children.

Easing the suffering of people who have suffered so much
Islamic Relief has provided Mohamed and his family with food parcels, hygiene kits, and qurbani meat to ease some of their hardship. Now they are able to eat wholesome food and better protect themselves from infection and illness.

“The baskets that you provide contribute to the alleviation of this suffering and we are very relieved when we receive them. It makes me feel safe because I know I can provide food for my grandchildren. We cook meals using the food they contain. I hope we will continue to receive this type of aid, because it saves our lives.”

Still, he tells us that every day feels like a year due to the poverty, tragedy, and daily struggles that they face. The grandfather wants nothing more than an end to the suffering in Syria. He reflects that, 10 years on from the start of the crisis, it feels as though 50 years has passed.

Deep inside Syria, Islamic Relief has been providing food and freshly baked bread, reaching over 770,000 people in 2020 alone.