Friday prayers have been cancelled in Idlib after 20 people were killed in attacks showing “callous disregard” for human life.

At least 20 civilians – including five children – have been reportedly killed in the past 36 hours in Idlib, Aleppo and Hama governorates, as a fresh wave of attacks has hit the north-western parts of the country.

The deadliest attack took place on Thursday in Kafranbel in southern Idlib, on what is usually a busy market day in the town. At least 12 civilians, including three women and five children, were killed according to the Syria Observatory for Human Rights, the local civil defence as well as other on-the-ground sources. At least 25 others were injured and many of them remain in critical condition, Islamic Relief’s operating partners on the ground said.

Fears of fresh attacks on civilians

The fear of fresh attacks on civilians and civilian infrastructure has since forced Friday prayers to be cancelled in mosques in Kafranbel, Islamic Relief staff said today. Civil defence teams have also placed warning signs around the remaining unexploded ammunitions but are still waiting for specialist support to remove these.

In Kafranbel, the local civil defence forces have reported that cluster ammunition was used in this attack, blaming this for the high casualty count. These kinds of weapons are banned under international law. 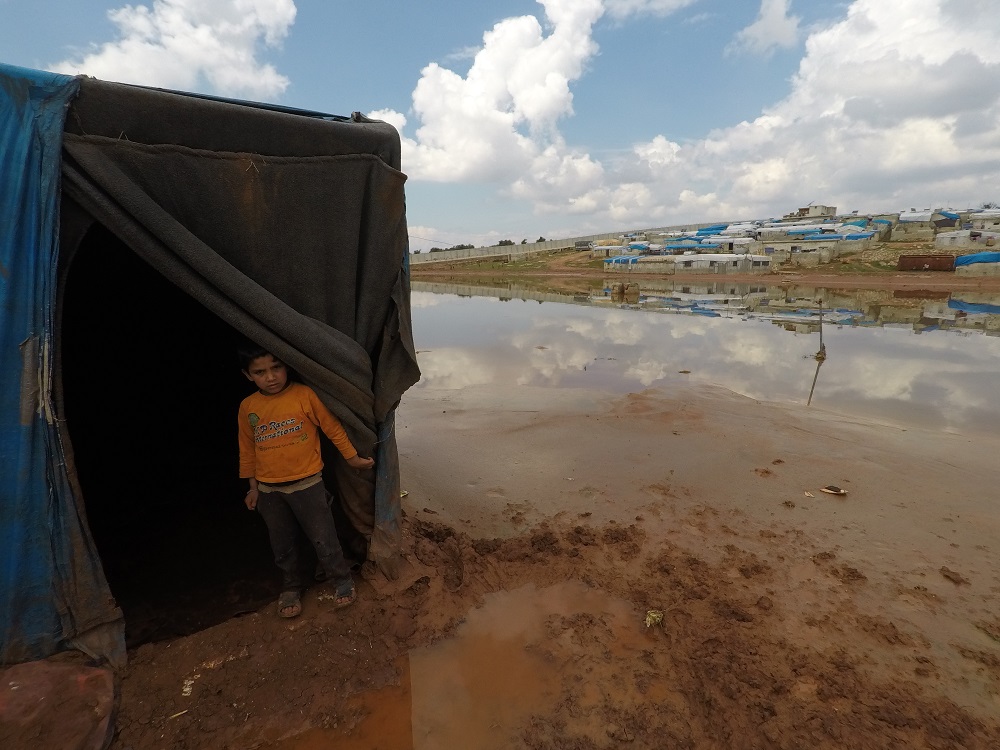 Recent heavy rains and flooding have inundated tents in Alumrey camp, on Syria’s border with Turkey.

Islamic Relief has sent urgent supplies of painkillers and anaesthetics for the patients who needed operations, but the whole Idlib region is suffering from widespread shortages of medical supplies and staff, with not enough doctors to assist the wounded.

“This escalation of attacks has sent a shockwave of panic and fear among the people of Idlib who worry that attacks could resume on a massive scale at any point and simply see no end in sight.

“All parties must respect international law which clearly states that civilians and civilian infrastructure are not a target. The international community cannot keep turning a blind eye to these continued breaches of humanitarian law and the suffering that goes with it in the north west of Syria.”

According to the UN, 90 civilians were killed in Idlib in March alone this year and more than 86,000 people were displaced in Idlib as a result of escalating violence in February and March.

“Even without the bombing attacks, the civilians in Idlib are in a desperate state. They are living in freezing conditions in flimsy tents, with heavy rainstorms last week only compounding this misery. Over 8,000 families, many of whom have been displaced multiple times, were flooded out of their tents, with mud and water destroying their bedding and food. They cannot take much more.

“The hospitals and health centres in the area are struggling to operate and perform even routine treatments as funding cuts mean that they don’t have the staff, the medicine or the equipment to treat people properly. Islamic Relief and other organisations are doing what we can but the needs are already huge and any further attacks or an influx of casualties could be catastrophic.”

Thursday’s attack on the market, happened exactly two years after dozens of people, including many children, were killed in a chemical attack on the nearby village of Khan Shaykhun.

“Many people in Idlib had friends and relatives who were killed or injured and news of every new attack simply brings back the horrors that families have repeatedly endured throughout more than eight years of constant crisis and violence,” Mahmoud added.